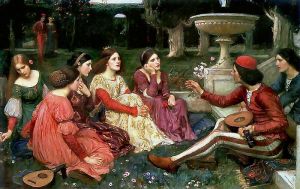 People love saying things that sound clever. Especially people who aren’t very bright. Take that combination — an intellectually mediocre person and a desire to appear “deep” — and you’ve got the perfect recipe for the birth of notions so intensely stupid, they are destined to endure forever. These are notions that end up on “inspirational” posters of sunsets and beaches. These are notions that the world’s vulgarians repeat over and over — and still think themselves not only well-informed, but original. So here is my third list of certain pearls of “wisdom” that are common as dirt — and explanations as to how they are actually idiotic. (You can find prior installments here and here).

1. “People from the US are wrong to call themselves ‘Americans’ because ‘America’ refers to a continent (or two continents), and anyone who lives anywhere on that continent (or those two contents) is an American.” Oh, for fuck’s sake. You know, for a long time, I tried to be respectful and to keep a straight face whenever I got a dressing-down at the hands of someone from the other side of the equator for supposedly “monopolizing” the term “American”, but at this point, I just can’t help rolling my eyes. I’ve never heard people from Latin America (because Canadians don’t do this) refer to themselves as “Americans” unless they are lecturing someone from the US about the inappropriateness of adopting “American” is our demonym. And it’s not as if, when someone refers to himself as an American, or is described as an American, anyone is confused about where the person is really from. This is such a pretentious, inane complaint. Do we really want to split hairs here? If Christopher Columbus’ “discovery” of the New World extends to the entire continent, then Colombia has no right to monopolize the name (especially since Columbus never set foot in what is Colombia today). All of this here is Columbia, from Terra Del Fuego to Prudhoe Bay, and we are all Columbians, right? Why you being so imperialistic, Colombia? And isn’t it curious how everyone is okay with this? Hey: there is plenty to criticize America for without making such a specious grievance.

2. “He’s a man who’s not ashamed of his success.” Dear Reader, have you ever met a successful person who’s ashamed of his success? Yeah, me neither. And I’ve never heard of any such person actually existing. I don’t know of any rich doctor who’s ashamed of having a successful practice, or a Nobel Prize laureate ashamed of having won the Nobel Prize or a writer who’s ashamed of having written a masterpiece. Of course, there are certain types of success that are achieved by fraud, exploitation, corruption and brutality. People who become “successful” through such means should be ashamed, but never are. The phrase above is properly translated as “I like this person because he’s never let anything as ridiculous as conscience or empathy get in the way of his quest for power and riches.” Show me a person who lets a thing like that fall out of his mouth, and I’ll show you someone who aspires to being a better psychopath.

3. “Marriage is a contract / investment / business merger.” Every time I hear some “expert” elucidate with perfect condescension that marriage is a “contract”, it reminds me of an old Russian joke about a man trying to explain to someone who’s never been outside of Russia what a lemon is. “You know potatoes? A lemon is exactly like a potato, just different.”

Marriage is not a contract. Marriage is marriage. It’s a unique type of relationship — it is its own thing. I am consistently baffled by people’s efforts to explain what marriage is by characterizing it as something that it’s not. Not to go all lawyery on you, but marriage is not a true contract because it’s not an arm’s-length transaction, there is no consideration as such, the terms are vague, specific performance cannot be enforced, breaches cannot be defined, and even in the event of an arguable breach, you cannot truly be made whole. In divorce jurisprudence, marriage is sometimes treated as having certain contractual characteristics (mainly as a way to harness a legal theory to serve the ends of equity, in cases of manifest injustice) — but any similarity to classic contracts is tenuous at best.

As a tangent, I’ve been listening to this Second Amendment crap for years, and I wonder why my fellow gun-fondling Americans fail to realize that the Second Amendment doesn’t mention guns. Instead, it talks about arms. “Arms” is a broad term that includes guns, but isn’t limited to them. By the narrowest definition, any deadly instrumentality that I can actually carry qualifies as an “arm”. Yet the people who argue that any restriction, limitation or condition on gun use or ownership is patently unconstitutional, nevertheless hesitate to apply the same uncompromising stance towards other arms, such as bombs and box-cutters.

5. The above’s ugly cousin: “Criminals don’t care about laws anyway, so imposing conditions for the purpose of hampering criminals only hurts the law-abiding.” Apart from the obvious fact that every criminal was once a law-abiding person until he wasn’t, this is basically an argument for legalizing everything. Why should child rape be illegal? Normal, God-fearing, law-abiding people won’t rape children anyway. And those who like to rape children don’t care that it’s illegal. So let’s go ahead and abolish all of criminal law. And all of civil law, too. Because law-abiding people don’t need laws to abide by, and neither do criminals.

Look. Getting on the wrong train because you were confused about the schedule is a mistake. Grabbing someone else’s umbrella instead of yours when leaving in a hurry is a mistake. Failing to anticipate the full extent of the fallout from your actions may be a mistake. A mistake is something that happens by inadvertence, which is the opposite of intent. An intentional, deliberate course of conduct that involves planning and dissimulation is not a mistake — it cannot be. For the wrongdoer to call it that merely betrays his utter lack of remorse. It is a crude, lazy, perfunctory exercise in rationalization, an insult to the intelligence of anyone who has more than two or three little grey cells firing away somewhere. And thus, no apology, no atonement has any worth whatsoever as long as the word “mistake” appears in any part of it.

This is not meant to come across as impossibly judgmental. Everyone, yours truly included, has at one time or another done things that range from morally questionable to downright despicable — and it is possible to make up for them, move on, be a better person and be forgiven. But, I am a big fan of calling things by their proper names. And “mistake” isn’t a proper name to describe the actions of someone who knows exactly what he or she is doing.

8. “The most important thing is to forgive yourself/love yourself/realize you are special.” Translation: “Nothing in this world is as important as feeling good about yourself. Not fairness. Not common sense. Not moral obligation. Nothing. Let everything and everyone else go to hell as a result of your actions, and it’s all good, as long as you think you are the specialest thing in the universe since the invention of ice-cream.”

Think of an awful thing you’ve done, something that did serious damage to another person. Search your memory; I’ll wait. Okay, you got one? Good. Now let me take a wild guess here: you thought of something bad you once did, and IMMEDIATELY your mind went into full-rationalization mode. You automatically started thinking about how you really shouldn’t feel guilty for what you’ve done, because, take your pick:

“It was only that one time, and it’s not really who I am.”
“I was only fifteen.”
“I was confused.”
“It was a difficult time in my life.”
“Well, I didn’t intend to hurt anyone, and collateral damage doesn’t count.”
“All my friends did it.”
“The person I hurt wasn’t a saint.”
“I fell in with a bad crowd.”
“It’s not emotionally healthy to blame myself, so I don’t. (My health emotional comfort is the most important thing in the world.)”

Perhaps I’m wrong about you, O Individual Reader; perhaps you are not like that. But that would make you exceptional. For most people, being selfish is easy and natural, especially in a culture that prioritizes loving oneself, forgiving oneself, self-aggrandizing and shielding oneself from deserved blame over making things right. To listen to “experts” and spiritual “gurus”, there is an epidemic of low self-esteem, with people wallowing needlessly in guilt. From what I see, the opposite is true — and a person’s willingness to “forgive himself” seems to be directly proportional to his willingness to be terrible to others. It’s narcissism, pure and simple. And so, it’s not important to forgive oneself — or it shouldn’t be. It shouldn’t be among your priorities to never think about things that make you feel bad. What IS most important is earning the forgiveness of the people you’ve hurt and striving each and every day to be a better person — better to others, that is, not yourself. Which is really difficult if you are overly focused on feeling good about yourself.

9. ”I understand this is very un-PC …” Political correctness is commonly held to be the epitome of a world gone crazy in a misguided effort to spare the feelings and accommodate the perspectives of people who don’t meet the three criteria for default peopledom — (1) white; (2) male; and (3) American of Northern European descent — in other words, the vast majority of the planet’s human population. And to be sure, some aspects of political correctness — like the term itself, for instance — are arguably silly. But for the most part, trying to be politically correct forces one to re-examine racial, gender and ethnic stereotypes critically, and to take into account the perspective of people who are more often the objects of dominant public discourse, rather than the subjects — i.e. talked about, not talking. (Zigmund Freud’s comment to women in one of his lectures, “You yourselves are the problem,” is my go-to example of this kind of casual scholarly objectification.) Political correctness, then, when it’s thoughtful and not pro-forma, is the reverse of othering. So when someone is collecting praise for being “un-PC” or “politically incorrect”, I see less someone bravely speaking truth to power and more someone who is engaged in reaffirming the traditional principle that the only people whose feelings, interests and priorities matter and are considered legitimate, are white men, and denying the humanity of all others.

The strain of anti-intellectualism has been a constant thread winding its way through our political and cultural life, nurtured by the false notion that democracy means that “my ignorance is just as good as your knowledge.”